A spectacular addition to the Icelandic cultural landscape, when the Harpa Reykjavík Concert Hall and Conference Centre opened its doors to the public in May 2011 it was unanimously acclaimed as one Iceland's most important contemporary buildings. As the city's first purpose built concert hall, it successfully combines being used as a classical music venue – serving as the home to the Iceland Symphony Orchestra and The Icelandic Opera – with hosting conferences and exhibitions.

The Harpa was the brainchild of Henning Larsen Architects and Batteríið,while the renowned artist, Ólafur Elíasson, designed the façade. It consists of a steel framework clad with 10,000 irregularly shaped glass panels of different colours that reference the columnar basalt common in Iceland's terrain. The use of the glass panels provides a dramatic effect when the unique daylight in Iceland – which ranges from almost 24 hours in summer to the briefest glimpse of the sun above the horizon in winter – covers the building in a myriad of different colours.

It consists of four halls, three of which are used for concerts. These comprise a main concert hall seating up to 1,600 people, a rehearsal hall that can also be used for concerts seating up to 450, and a chamber music hall seating 200. With events taking place on a daily basis, protecting the public and staff is vital and the building's fire detection system plays an important role in keeping them safe.

The project's main contractor, IAV, began work in early 2008 and asked Iceland's leading fire safety specialist, ARK Security, to design, specify and commission the fire detection system. Kjartan Scheving, managing director of ARK Security, explains, ‘We have worked with IAV on many projects over the years, so when it came to implementing the life safety infrastructure at the Harpa they asked us to get involved. It was clear to me that the only way to ensure the level of reliability, quality and safety demanded was to install state-of-the-art products from Hochiki Europe.'

Scheving and his team knew that traditional point detection would not be possible due to the Harpa's very high ceilings. He comments, ‘Some of ceilings are over 70m high so three Hochiki Europe FIRElink aspirating fire detection systems were needed to provide the requisite level of cover above 10m. These are linked to four control panels which have 1,600 addresses assigned to them in 24 separate zones'.

Aspirating detectors are around 10 times more sensitive than general point detectors and are suitable where there is a high density of people and an early warning is desired. Explaining how the system works, Paul Adams, Hochiki's marketing manager, states, ‘The FIRElink aspirating unit consists of an enclosure that houses the electronics that are powered from a supply, and a fan inside it that draws air in via pipes that are connected to the unit. The air then passes across a laser light source that is projected into the air itself and if enough smoke particles are detected an alarm condition will be activated.'

The FIRElink systems are configured around Hochiki's Enhanced Systems Protocol (ESP) – a robust addressable communications solution for intelligent fire detection and fully integrated systems. ESP delivers exceptionally secure signalling and also incorporates error-checking technology to safeguard the integrity of the data and ensure correct communication. The system also has features drift compensation technology that, when activated by the control panel, automatically recalibrates the detectors every 24 hours.

The use of smoke machines within the auditoria necessitated the ability to turn off the detectors in these areas for up to four hours at a time. Scheving says, ‘Unwanted alarms are a serious problem for any premises but for concert halls they can be particularly disruptive, leading to the evacuation of the building and the interruption of the event taking place. Being able to deactivate the detectors in specific zones gives designated personnel a chance to investigate the cause of the alarm before taking further action.'

Aesthetics at the Harpa are very important and design continuity has to be maintained at all times. Being able to install the FIRElink systems' pipework in the ceiling voids helped ensure this, as did the availability of ALG-E optical smoke detectors in black to match the colour of the ceilings in some of the rooms. The system also utilises a wide variety of other addressable devices from Hochiki Europe including HCPE-E manual call points, YBO-BSB base sounder beacons, ACA-E multi-heat sensors, ACB-E multi-heat sensors, CHQ-DIM dual input modules and CHQ-DRC dual relay controllers.

The flexibility that the fire detection system boasts means that it can
control many other aspects of the building services infrastructure such as the elevators, ventilation system, smoke curtains, smoke hatches and sprinkler system. It is also integrates and controls a public address/voice alarm (PA/VA) system that has 1,032 speakers that can also be isolated in specific zones. ARK Security spent a total of three years working at the Harpa and Scheving is delighted with what his team achieved.

He concludes, ‘When we talked to the Reykjavík fire service they said that it was the most sophisticated fire detection system in Iceland. Since the Harpa opened it has proven 100 per cent reliable with no unwanted alarms, which goes to show that specifying products from Hochiki Europe was the right decision.' 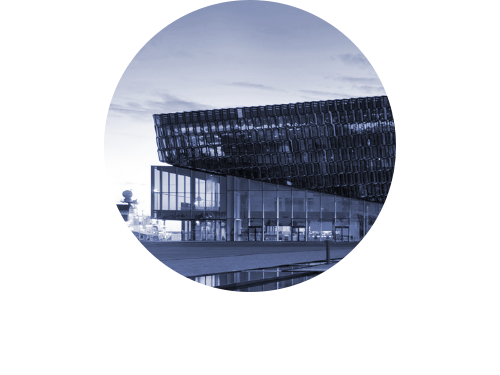